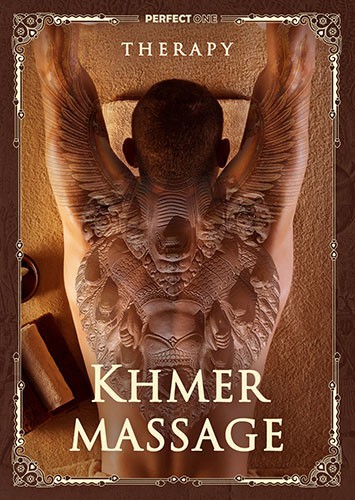 Khmer massage is an authentic ancient healing practice from ancient Cambodia. In the last century, it has been influenced by Chinese, Vietnamese and Thai medicine.

Khmer massage represents a deep and integrated system that involves an application of minerals and sacred symbols tattoos. The aim of this massage primarily concentrates on the restoration and activation of bone marrow. In Khmer anatomy, bones were seen as being capable of both healing and causing disease because bone marrow is connected to the high vibrational energy existing in our body.

This type of massage to another person was done only by women, although the training was complex and was associated with a single Khmer school of Churning the milk of the ocean. This unique knowledge formed the entire Khmer metaphysics.

During the manipulations, the masseuse immersed herself in a special state of consciousness, capable of changing the quality of energy in the palms.

Under her fingers, different parts of the body became flexible, bones were soft and mobile, blockages were removed, knots were unfolded, tendons and other tissues were filled with life-giving essence. This result was based on the churning of inner effort.

By manually influencing the body in the practice of Khmer massage, it is essential to create a special tension deep inside. It is important to keep the brain constantly in tune and being attentive. Depending on the level of the masseuse, balms, essential oils, crystalline and herbal mixtures were also involved.

The one who connects bones into a single system is called Kru bakbeg, or Kru-tai (គ្រូទាយ) — these are soothsayers who, depending on the situation, vary their practice, based on their understanding of the macrocosm and attunement to bhavas.

The masters called Kru son thith (គ្រូ សណ្ឋិត) express a special state of attunement. They have, like soothsayers, continuous attunement to high vibrational energies. Their practice can be rather hypothetically called massage since it is rather a kind of healing on a deep level.

Kru-Khmer teachers can consume amrita, their life was strictly ritual, filled with various practices for improving the body and brain. The main practice is the so-called «whipping the milk ocean» — the production of a drink that gives immortality.

The massage itself has always implemented the basic churning scheme, to which the schemes necessary for the tasks were added. Thus, Khmer massage resembled a ritual with various attributes.

Therapy for selected ones

The Khmer massage was created and intended “for the first among equals”, to help of assimilation of amrita — the drink of immortality. This massage can also be considered a special type of Khmer meditation aimed at activating divine power in the body.

Knowledge about this therapy has a transcendental history and, perhaps, only a few can fully practice it. This therapy requires a specific attunement, internal effort, and, of course, knowledge of integral medicine.

The basis of Khmer massage is the development of an internal force and distribution of energy effort through the whole body. This would allow not only body-oriented restorative procedures (unblocking the body), but to change the personal code, remove timeless restrictions, and eliminate programs of self-destruction.

The main task in the process of the massage is attunement to bhava. It can be done through a focused state both of the masseur and the person being massaged (if the massage is done to another person). Moreover, the master, in the process of performing the procedure, should constantly be in tune with the constellation of the Dragon. Those proficient in this art are regarded as similar to the devatas — local deities. That is, the therapist was associated with a local deity.

Therapists admitted to the study and practice of this secret massage practice have belonged to a special caste of society among the Khmers, and their work was equated with the process of receiving amrita (high vibrational substance). They were distinguished by special prenatal and acquired qualities, possessed high mental strength, operated with unique knowledge, had well-built and focused movements, and also represented human qualities bordering on superpowers. In special cases, they were even charged with the deliverance of high-frequency energies in special zones of Angkor Wat.

The Khmers were capable of operating a high-frequency nature, and therefore the masseurs had to have a high energy intensity, and a masseuse with a higher energy potential was selected for each massaged person.

Particularly important are the fingers of the masseurs, who could transfer heavenly energy both to themselves and to the person being massaged. Just as apsaras were considered heavenly dancers, so devata massage therapists were considered having holy  artisans.