Online workshop : The construction of the temple of light : 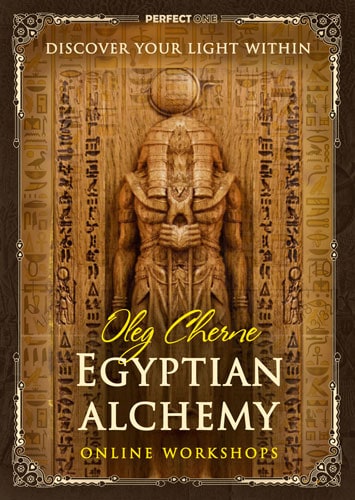 Egyptian alchemy is the essential ​​alchemical discipline. The very existence of ancient Egyptian civilization was an alchemical process. At that time, illumination of light was considered according to the law of the threefold system. The law of Atum guided the method of transformation.

The cognition of the dimensionality of space took place from the perspective of energy tension. It formed special conditions for a living when life itself was seen as an act of significant work (which can be understood as a process of ordering chaos).

The formation of knowledge, which we can employ even today, occurred approximately 2500 to 1700 BC. It was followed by adaptation to the ordinary reality before the period of the Sais dynasty (663–525 BC, the last Egyptian dynasty before the Persians conquered Egypt). Another important principle was the unification of the consciousness of the nomes (primarily the nomes of Middle and Lower Egypt).

Egyptian alchemy is a particular scale of measurement, consisting of conditions that had a personification in the image of Seth, Anubis, Isis, Osiris, etc. Egyptian alchemy was originally understood as «the effort to exit a day to be renewed by its rays.»

Conceptually, Egyptian alchemy is associated with the concept of «Aton» as the highest function of experiencing the nature of light consciously. Aton is a symbol of the One. It is created with the effort of hands, and a solar disk with rays is perceived as hands.

Further, it would be worth talking about the fifth level, the task of which is to maintain the level of development after the end of its existence on earth. Still, the perception of this level quickly disintegrates into faith and disbelief in the idea of ​​resurrection, so from the position of Egyptian alchemy in its pure form, this level cannot be considered.