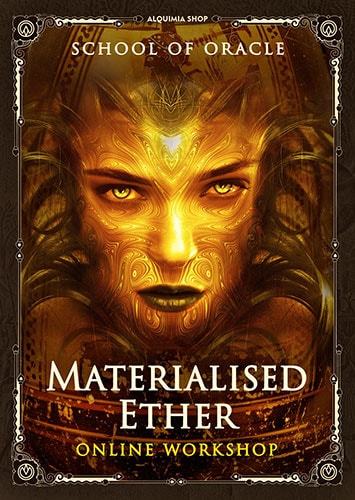 Perception of the sound of ether, its potential, or vibrational frequency is the essence of the Orphic oracle. Being able to experience subtle sound requires the advancement of the ability to hear, perceive and interpret this vibration. It is like we enter and immerse into the sacred space of ether where day and night are equal in their virtues.

Each word has a frequency, amount of light, vibration, and by naming something we concentrate and embrace its essence in that name.  Interestingly is that the vibration of sound in the space of Chaos, Kronos or Ether perceived and interpreted differently.

Naming something or initiating with word ignites a process of transmutation. Transformation and cognition of the visible happen when completeness or temporality destroyed by timelessness (or titans) and the process of rebirth is inaugurated. The use of the sound in the initiation process means that previous, old versions, had died or could die.

The sound is important for us to penetrate it, to become initiated by it. A purified word is like grounding into a pure vibration. But who can be initiated by a word? Is it still possible today to materialized the sound of ether? What are the laws governing the formation of sound?

Learning to work with sound requires the ability to refrain from just saying to express it reactively. Abstinence from the word is no less intriguing concept than, say, abstinence from food. The word generated by the desire to speak and the word generated by the opportunity to speak signifies two different words. The art of producing conscious sounds is a unique ability nowadays. We should not speak so that our words fall into the mud.

What should be a word to pronounce it with considerable respect? It is important that it does not immoral us and does not take the form of gross superstition, which allows you to cover gullibility and ignorance, exploiting and manipulating the consciousness.

If we want to bring something closer to ourselves, then we should learn to turn away an unnecessary from us, since it is followed by the energy that created that unneeded.

Pay attention to the spell of excessive words that you unconsciously say in overflow as you might enchant yourself by it. And if we do not understand the laws of word formation, we cannot reach higher powers to fulfill our desires, because in this case, the sound of our consciousness won’t be able to reach them.