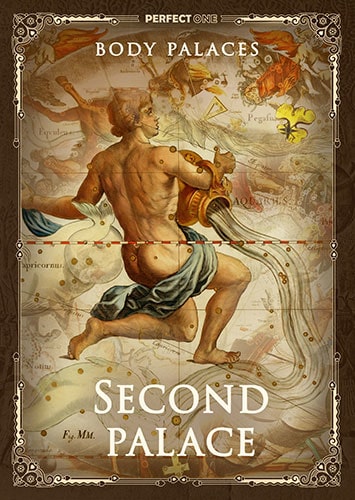 The second Body Palace (the second Bhava) represents the energy processes of the third integral field. The second Bhava (or eleventh, if you count from the top down) personifies our body within the laws of the third dimension. This palate is connected with the knees, where a certain structure of connections is formed. These internal links predetermine our external rhythm of motion.

It is the Palace of Opportunities, containing many secrets, and despite the actual connection to our space, the energetic activity of this Bhava is not always sufficient. The efficiency of this palate depends upon the ability to produce an elixir (bone marrow).

The Khmer knowledge system is associated with the formation of the anatomy of a perfect body which is symbolized by the female body.  The woman’s body is more integral in its structure and contains the kind of force represented in the macrocosm (corresponding to the constellation Kumbha or the constellation Aquarius).

In macrocosmic space, the Palace resonates with the star Altair, whose behavior, especially associated with gravitational darkening, perfectly reflects the entire potential of the second Palace and the entire third dimension. It is thus the second Palace that represents the nature of the third and second heavens in the laws of the integral fields.

The Second Palace carries out a whole spectrum of luminosity, and, despite its connection with the star Altair, which has a sufficiently high luminosity for the third dimension, it is precisely its spectrality and remoteness that predetermines the tasks of the Palace associated with the fact that this luminosity must also be interconnected and ordered. As a result, we not only get the luminosity of the third integral field, but also the whole technology of obtaining it, something like “light at the end of the tunnel”.

This process is associated with the idea of ​​angular velocity, capable of creating fast rotation inside the body (as it happens with the star Altair). In other words, the second Bhava is a sort of generator that can accelerate luminosity, which becomes a special accumulation force. Besides, it is generally accepted that in the second palace there are two energy-regenerating forces, correlated with yoni and lingam.

The second Bhava is the ability to acquire, receive, and realize the graha (vital force) of Stri-Dirgha, which forms the depth of the internal processes in the Palace. At the same time, the second Bhava depends on the «clusters» in the first Palace, as well as on the nebulae of the connection between the lower leg, foot and knee, which primarily affects our movements. By working with this Palace, we create a vessel of nectar that can fill not only knees, but also legs and feet with energy.

It turns out that while the quantity of light is theoretically high in the second Palace, it is constantly fading under the intrusion of the first Palace. If it becomes permanent, then there is a division into three Palaces, where, conventionally, the legs begin to represent the second Bhava in their pure form, and the knees — the third.

Therefore, it is important to form the primary force in the second palace. This force is not static, but dynamic, as it depends on motion. In other words, in the second palace, we should not only have energy, but also be able to transfer it. And if this Palace begins to realize all its possibilities, then the second Bhava receives an «inner star», which already correlates with the delta of the constellation Kumbha — the Skat star.

According to the Palace’s architecture, its mineral base varies from charoite to sapphire. It all depends on the penetration into the internal nature of the knee vessel and therefore on the effect on the bone marrow and whether it is included in the second or third dimension.

Due to the peculiarities of human existence associated with movement, the knee is a certain internal measure that not only affects our vitality but also represents a vault of possibilities, especially in the tasks of connecting with our spirit. As a consequence, the second Bhava may be a nominal Palace — that is, in theory, activated if there is life within, and spiritualized if there is consciousness within.